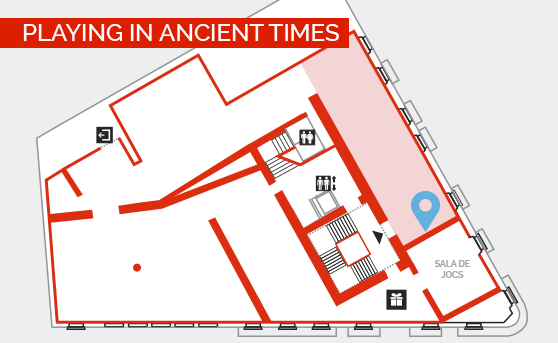 Etymologically, the word “game” comes from the Old English word “gamen”, meaning “joy, fun; game, amusement”. Although the term is itself ancient, man has been playing games for even longer.

The first references to games are found on the tombs of kings and important figures of Babylonia that date back to 3000 B.C. Archaeological excavations led to the discovery of a board game named Ur, which is a direct antecedent of chess.

Mediterranean archaeological sites have revealed hopscotch courts and a number of artefacts such as spinning tops, marbles, figurines, dolls and balls. However, not all games and toys are for children: some monuments and archaeological sites have preserved engravings on stone, such as at the Santa Maria d’Agullana Church, the prison in Castelló d’Empúries or the Monastery of Sant Pere de Rodes.