This teddy bear, which belonged to Anna Maria and Salvador Dalí, was made by the German company Steiff in 1910. Founded in 1880 by Margarete Steiff, the company, which remains up and running, makes high quality toys.

Based on plush, hand-crafted animal figures, Margarete Steiff created a company that was soon exporting worldwide. In 1902, Steiff designed its first teddy bear, model 55PB, which was the first plush bear with jointed arms and legs. Despite the initial reticence of its founder, this teddy bear was presented at the Leipzig Toy Fair in 1903. By 1906, Steiff was already exporting its creation en masse to the whole of Europe and the United States. In 1910, Steiff won the Grand Prix medal at the World Fair in Brussels.

The 55PB model was replaced the following year by the 35PB model, of which 12,000 were sold at the St. Louis World Fair of 1904 (Missouri, United States), where the company was presented with the gold medal in the contest. As with the previous model, the arms and legs of this teddy bear were attached to the body with string. On later models, different solutions involving wire and string were used, although none provided an optimum answer. Finally, in 1905 Richard Steiff, nephew of the founder, designed the attachment that the manufacturer still uses today.

This teddy bear was the favourite toy of Anna Maria and Salvador Dalí, and was given its name by the poet Federico García Lorca who, during a visit to his friend Dalí's home in Figueres, was able to play with it.

Made by: Steiff, Germany 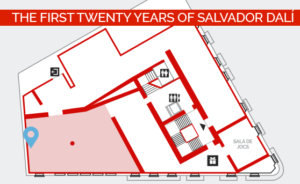