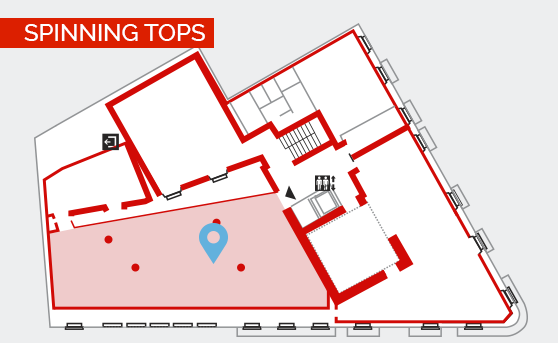 The spinning top is one of the oldest and most universal traditional toys. Its origins can be found in Celtic, Mesopotamian or Egyptian archaeological sites, which seems to indicate that it appeared simultaneously in different territories.

Spinning tops, with their advancing rotary movements, have for ages served astronomers and physicists to investigate and explain principles of physics and other phenomena: this is the case of the Bauhaus school, which used the spinning top to study certain concepts of the theory of colours. The materials with which they have been made, along with their shape and ornamentation, reflect to perfection the culture that has created them.

This area displays, among others, the Catalan spinning top, characterised by its red tip, a top from the Balearic Islands and others from Quebec. There is also a remarkable set of Japanese tops with a great diversity of styles and high-quality finishes with exquisite treatment of the materials and decorations.

And on “top” of all this, the Catalan spinning top is the emblem of the Toy Museum of Catalonia!