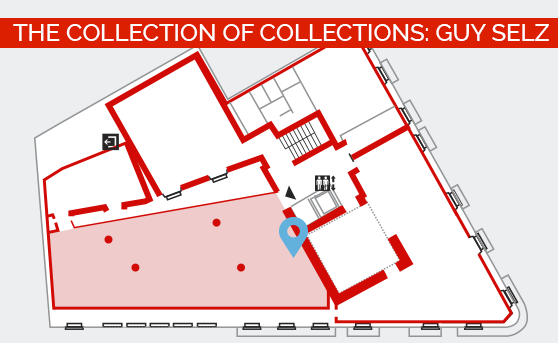 Guy Selz (Paris, 1901-1975), a graphic designer and journalist, was a member of the founding team of the magazine Elle and the person in charge of its cultural reports. A keen collector, he took great interest in creativity and popular art. This led him to collect unusual, surprising or captivating objects, without hierarchies or frontiers between the genres and the arts. He came to have over 30,000 pieces which he conserved in his home, exhibited and grouped according to his own aesthetic sensibility. In this setting we display the majority of the items of the collection which his children Philippe and Dorothée Selz donated to the Museum, recreating the appearance it had when it was exhibited in his home. In 1974 the collection was exhibited with great success at the Decorative Arts Museum of Paris, organised by its head curator, François Mathey.

Selz’s interest in popular art is clearly seen in, among other things, the collection of statuettes, since from 1933 to 1936 he ran a bar in the island of Eivissa. Also notable is the series of dolls created around 1954 by Madame Zka, a patient in a psychiatric hospital – a fictitious name to preserve her privacy – who passed her time sewing dolls with great detail and perfection and with strong sexual connotations. These dolls, which are at the same time both masculine and feminine and can be undressed to reveal the multiple sexes they display, aroused a lively interest in Selz’s friend André Breton.