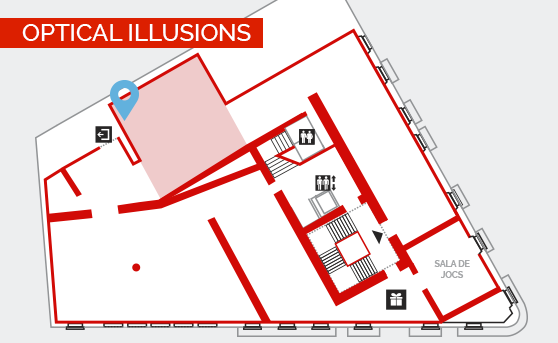 Some toys and games alter our visual perception, while others broaden our interpretational ability. We learn that not everything that we see is real, nor is every shape exactly as we see it, contradicting even the most basic common sense. Reality and fiction become blurred and everything seems possible.

In this area, the focus is on objects that create optical illusions: figures and games that trick our eyes and stimulate our brains to entertain us. Examples include an anamorphoscope, a cylindrical mirror that restores a distorted image to its normal proportions; a zoetrope, a predecessor to the cinema; or projectors of different formats for which movement is key.

Among the objects in this section, it is worth pointing out the first NIC cinema projector made entirely of wood in 1935 by brothers Tomàs and Josep Maria Nicolau, or the sound projector (also made by NIC), the Isuar Cinema projector and the Mickey cinema, produced in Barcelona between 1930 and 1936.