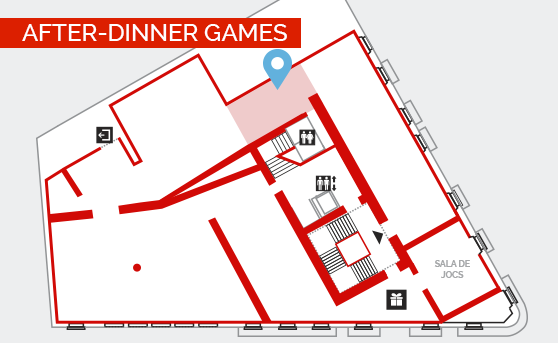 Tables are ideal for studying, relaxing, eating and enjoying idle chat. This four-legged piece of furniture is also where we learn to share the excitement and danger on a board that is governed by chance and unexpected changes in luck.

When he was a small child, the poet Joan Brossa spent many happy hours playing with this “Adivino Mágico” (Magic Fortune Teller), a game produced by Agapit Borràs of Mataró in 1920. The circular shape of the game is reminiscent of the circles described by the Medieval philosopher Ramon Llull.

We also have a 1930 version of the game called “Le cochon qui rit” (The laughing pig), which was popular in French homes at the time. The first player to complete the pig’s body won.

For anyone who wanted to emulate the most daring mountain climbers without suffering from vertigo or risking freezing temperatures, the best option was to play the board game called “Ascensión al Everest” (The Climb up Everest) or “El Campeón excursionista de Montserrat” (The Winning Excursionist on Montserrat).